A campaign for pets and people

The Humane Society of Charlotte

We're focused on the future.
How can you help?

Improve the lives of pets & people...

by offering welcoming spaces for pet adoptions and family-friendly activities and recreations at the new community dog park.

by collaborating with education programs to model early character traits like kindness, respect, empathy, and responsibility.

by creating more access to affordable pet health and wellness services that we provide to community pets through our clinic.

with the Charlotte-area community and join their families as the human-animal bond is strengthened through the years.

Why do we need a new facility?

We can no longer ignore the constraints of our current facility. Because much more can be done to improve animal welfare and overall community health in Charlotte, plans are underway to build a state-of-the-art Animal Resource Center to serve pets and the people who love them. 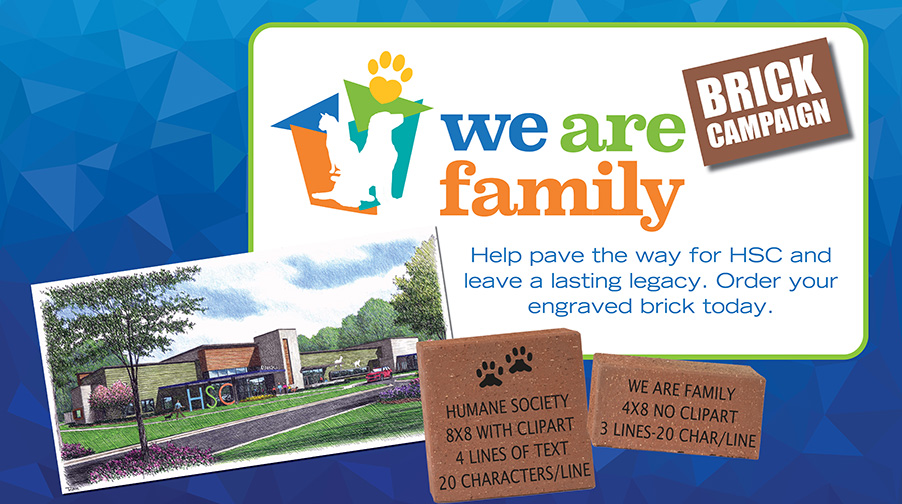 Help pave the way for homeless animals and leave a lasting legacy at the new Humane Society of Charlotte Animal Resource Center. Personalized brick pavers are a paw-fect way to honor a loved one or special pet this holiday season. Your contribution to this lasting monument will go towards our $15 million campaign project goal and will be installed at the end of the construction process which is anticipated to be in late 2021.

A New Home for HSC

The Humane Society of Charlotte is nearing completion of a transformational capital campaign to build a new shelter and animal resource center in Charlotte. All monies raised from the campaign go towards our $15 million project goal. 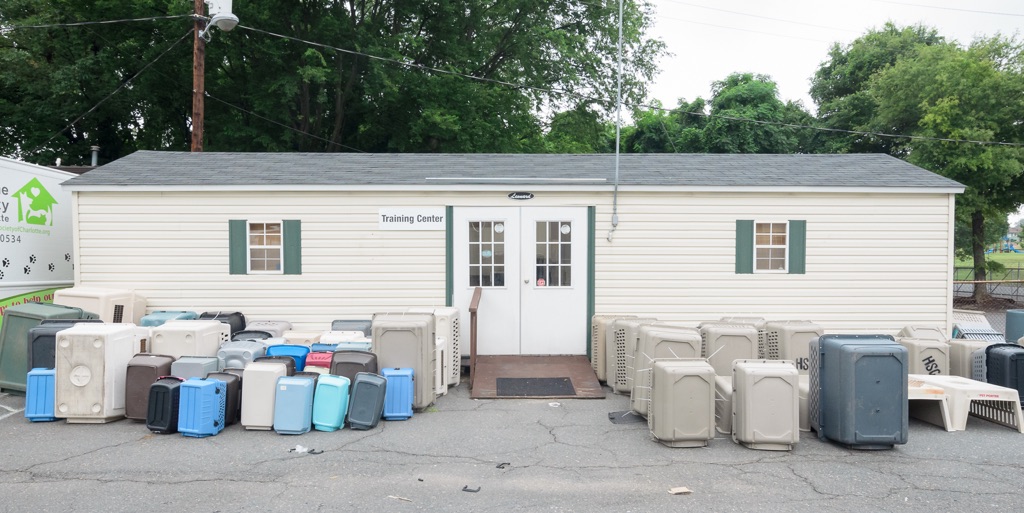 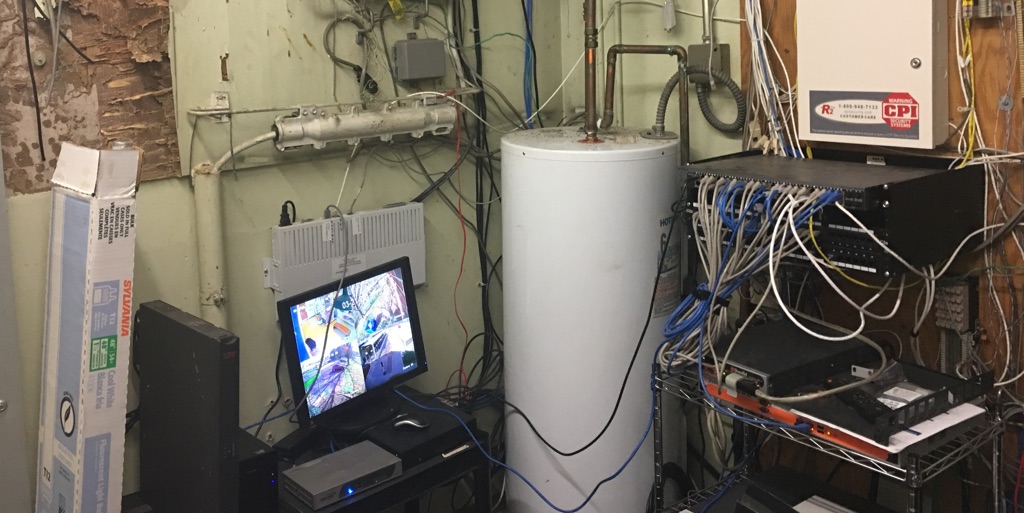 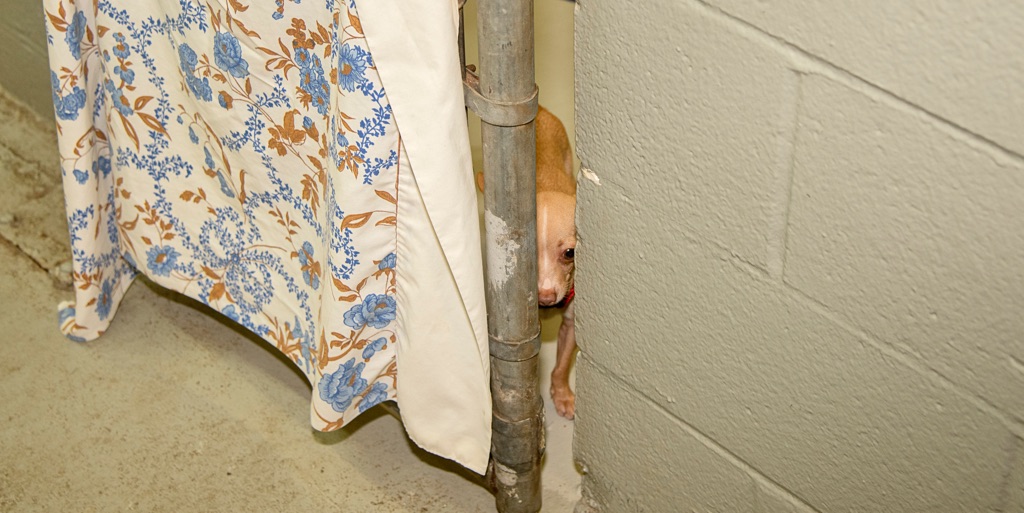 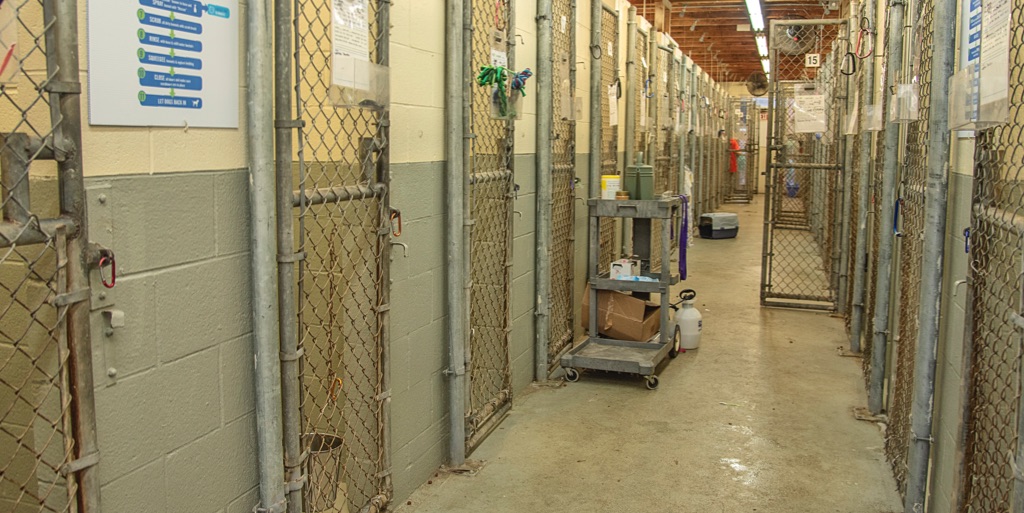 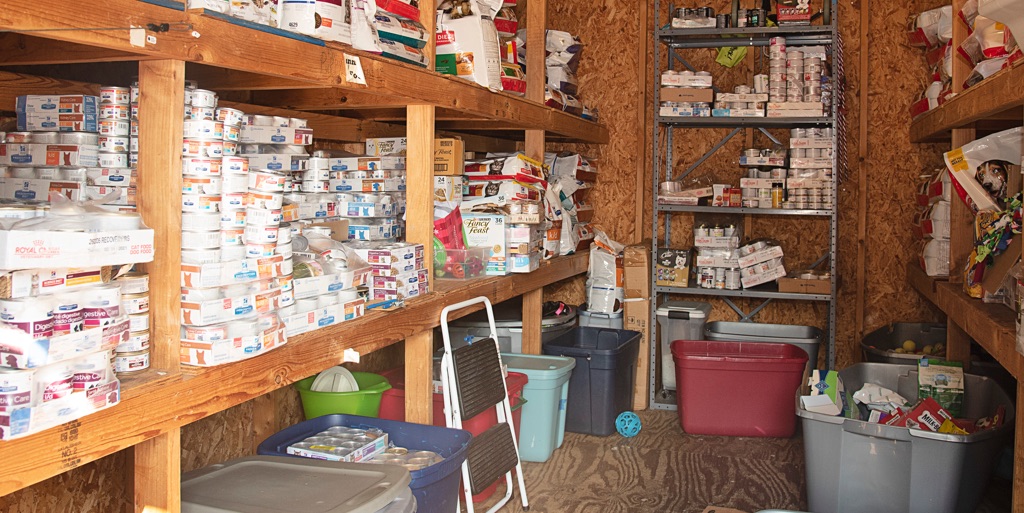 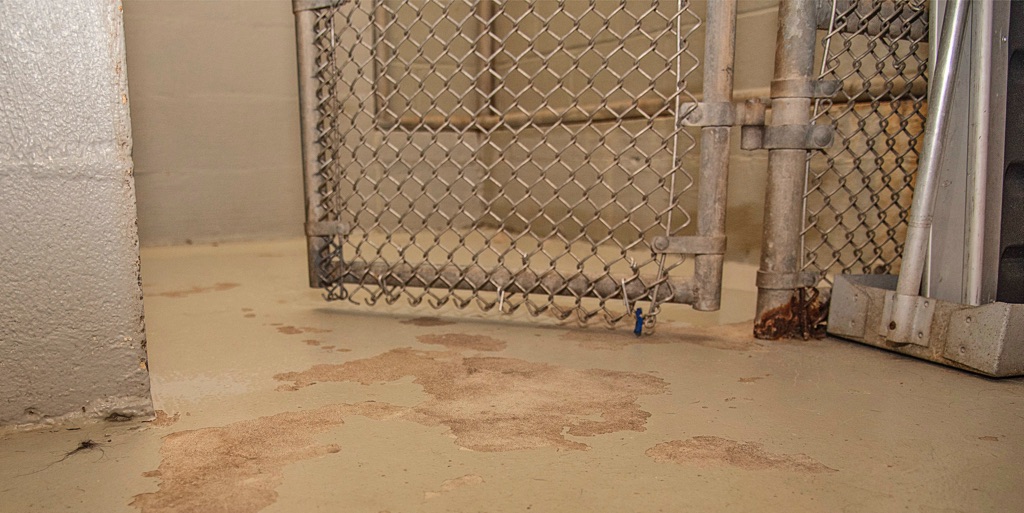 Clinic services is limited in providing spay/neuter surgeries and other wellness care due to a lack of adequate surgical areas, recovery space and capacity for expanded services.

In our current facility, we are unable to provide resources for behavior modification, training and owner education due to lack of appropriate training spaces.

Our facility prohibits us from engaging with interested educational groups due to lack of proper space for them to gather and visit with the animals. 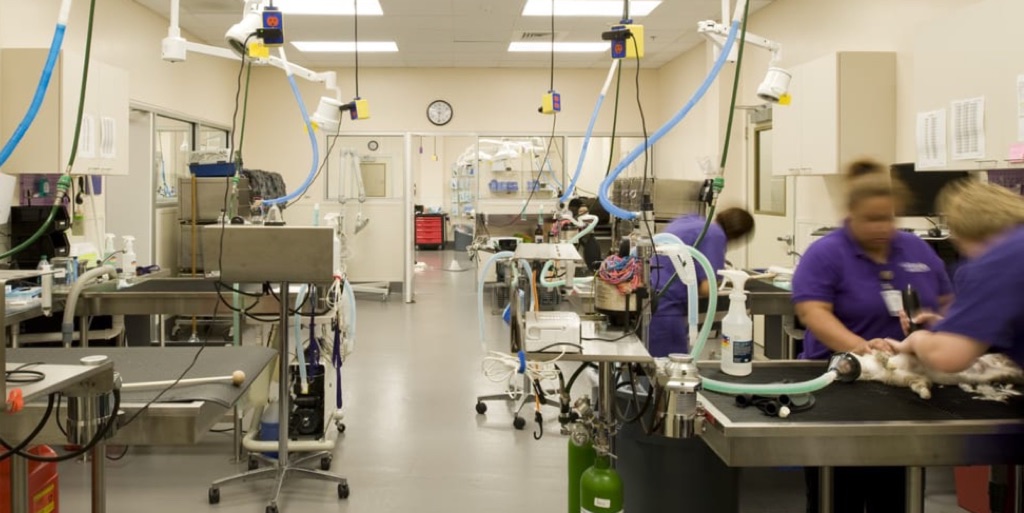 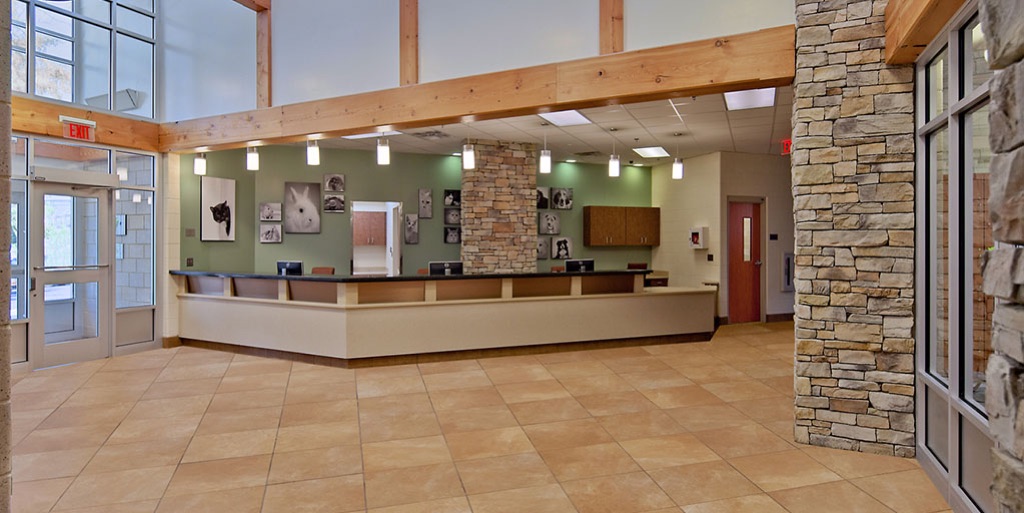 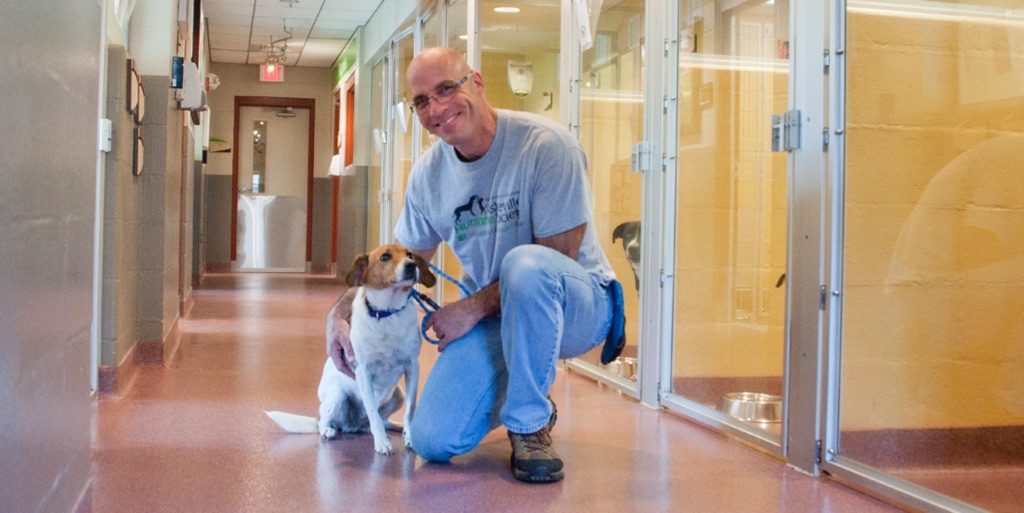 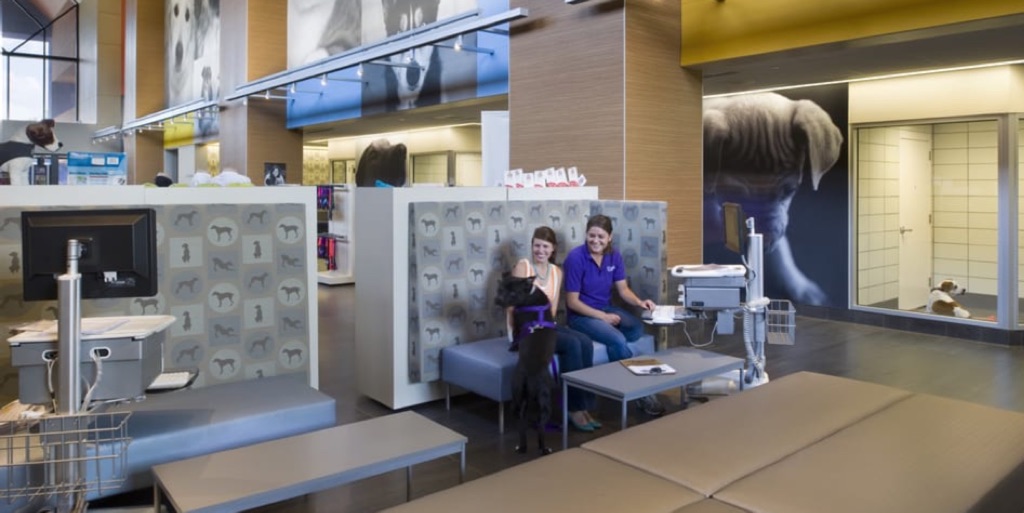 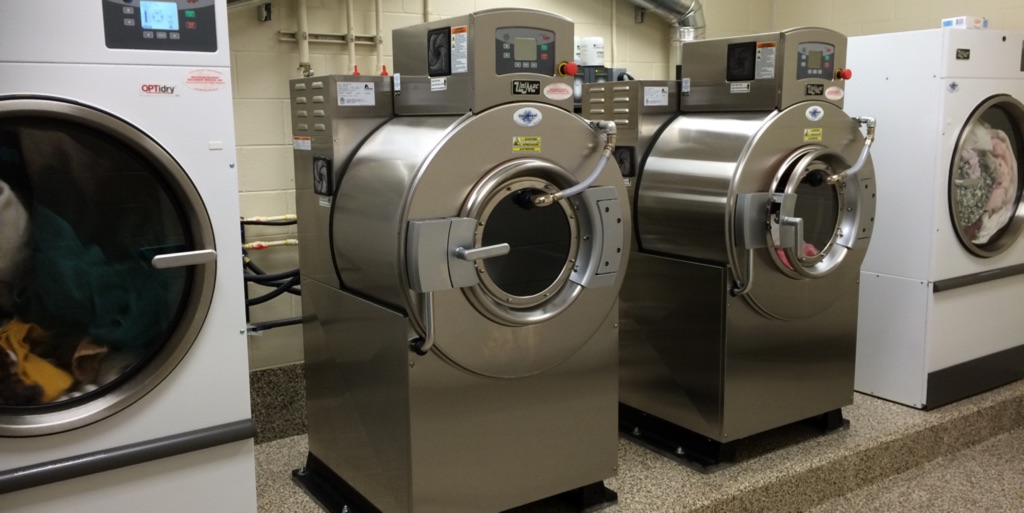 Expanded veterinary services in a state-of-the-art clinic that will expand our capacity to provide much-needed low-cost wellness care.

The ability to provide training opportunities for people and their pets increases pet retention. We can provide expanded resources to those that need it most.

A welcoming adoption center and cat café will serve as a destination for pets and people to relax, learn and socialize.

Collaboration with area schools to model early character traits like kindness, respect, empathy, and responsibility in an engaging environment through an actual humane education program. 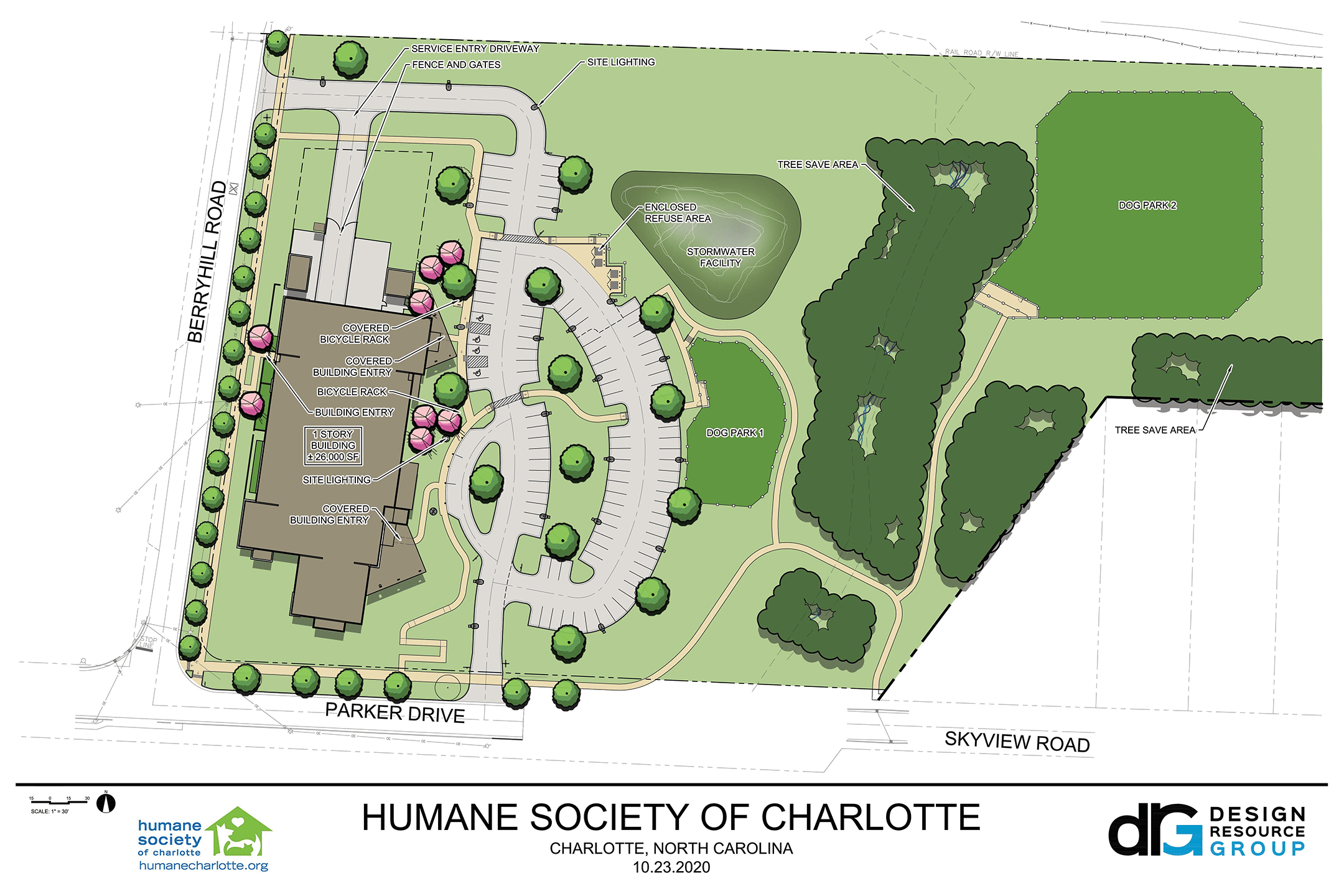 The Humane Society of Charlotte is proud to be leading the effort of creating the first animal resource center for the city of Charlotte.

What I'm most excited about with the new animal resource center is that this facility will mirror how I think the Charlotte community feels about our pets. My Joey is the most perfect specimen of a dog that I have ever known and there is no way he can understand how much joy and love he has brought to our family. Everybody should have a dog like Joey.

The new design of the HSC Animal Resource Center was developed with innovation, durability, and comfort in mind. Our goal was not only to provide a better environment for animals but for people also. The new state-of-the-art HSC Animal Resource Center will feature top of the line features in every aspect of animal care, veterinary services, and community hospitality. 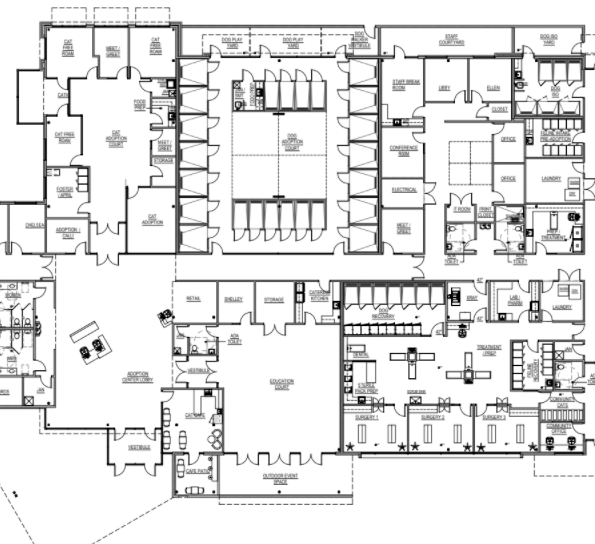 What is the campaign goal?

The overall project goal is to raise $15 million dollars. The new animal resource center will be constructed from highly durable materials that can withstand more than 20,000 animals moving through it annually. It will include top of the line features in every aspect of animal care, veterinary services and community hospitality including a climate controlled environment for all animals, extensive plumbing and sanitation systems, an advanced HVAC configuration, and updated animal spaces. This will be the first animal welfare center of its kind in the city of Charlotte and we’re thankful for the support of our community which has come together to help us raise over $14 million of our goal. We’re confident Charlotte will support us and help us finish our fundraising.

How much should I give?

Only you can answer that question! We are asking donors to consider giving at certain levels because we know it will take all of us stretching together to reach our goal.

Is my gift tax deductible?

Are gifts of stocks, bonds, real estate or other real property accepted?

Yes. Gifts of stock and property can often have substantial tax advantages for the donor. You may be eligible for deductions up to the full market value of the asset and may be able to avoid capital gains on the appreciated property. We encourage you to speak with your tax or financial advisors to determine the best way for you to make your gift.

I was just blown away by all of the programs and services that the Humane Society does in this town. Helping people to keep their pets, working with veterans, and the volume of animals that they're able to find homes for and spay and neuter every year with the limited resources and limited budget and the less than ideal facilities... it's just a terrific organization doing a great job. The Humane Society of Charlotte does more with less than any other organization we've ever seen.

Why does HSC need a new facility?

Will you accept planned gifts?

Yes, but they will not count toward the primary campaign goal. In order to meet our current needs, we need gifts in cash, stock, and appreciated assets.

Will I still be asked to give annually?

Yes. Our operating budget is supported by your Annual Fund gifts, and we are still going to need them! Campaign pledges are in addition to your annual support.

What is the timing of the campaign?

We anticipate reaching out fundraising goal by the completion of construction in the Spring of 2022.

When do you anticipate the construction to be completed?

Construction on our new campus, located on Berryhill Road, has begun! Our construction team is moving along ahead of schedule and we are anticipating completion in the Spring of 2022.

HSC is honored to have been supported by

The Humane Society of Charlotte is honored to be supported by Charlotte's first family, former Carolina Panthers Coach Ron and Stephanie Rivera. When the Riveras arrived in Charlotte in 2011, they immediately set out to start making a difference in our community.

After a serendipitous meeting at another charitable function, Stephanie Rivera and members of HSC leadership bonded over a shared love and respect of animals. Not too long after, members of our leadership would again encounter the Riveras, this time Ron, and the relationship would be solidified.

In the eight years since, HSC has worked with the Rivera family to produce several charitable calendars, cookbooks, t-shirts and more. When the time came for HSC to make serious decisions about our future animal resource facility, the Riveras were first in line to help us. As true animal advocates and supporters of our city, HSC is privileged to partner with The Rivera family.

Pets complete a lot of families and they've always completed our family. Getting these rescues into great homes is something that we're hoping to be able to help to do. The educational program is going to be especially important for the community. It's going to give families and children an opportunity to learn how to care for their pets. That's why we're part of the family. 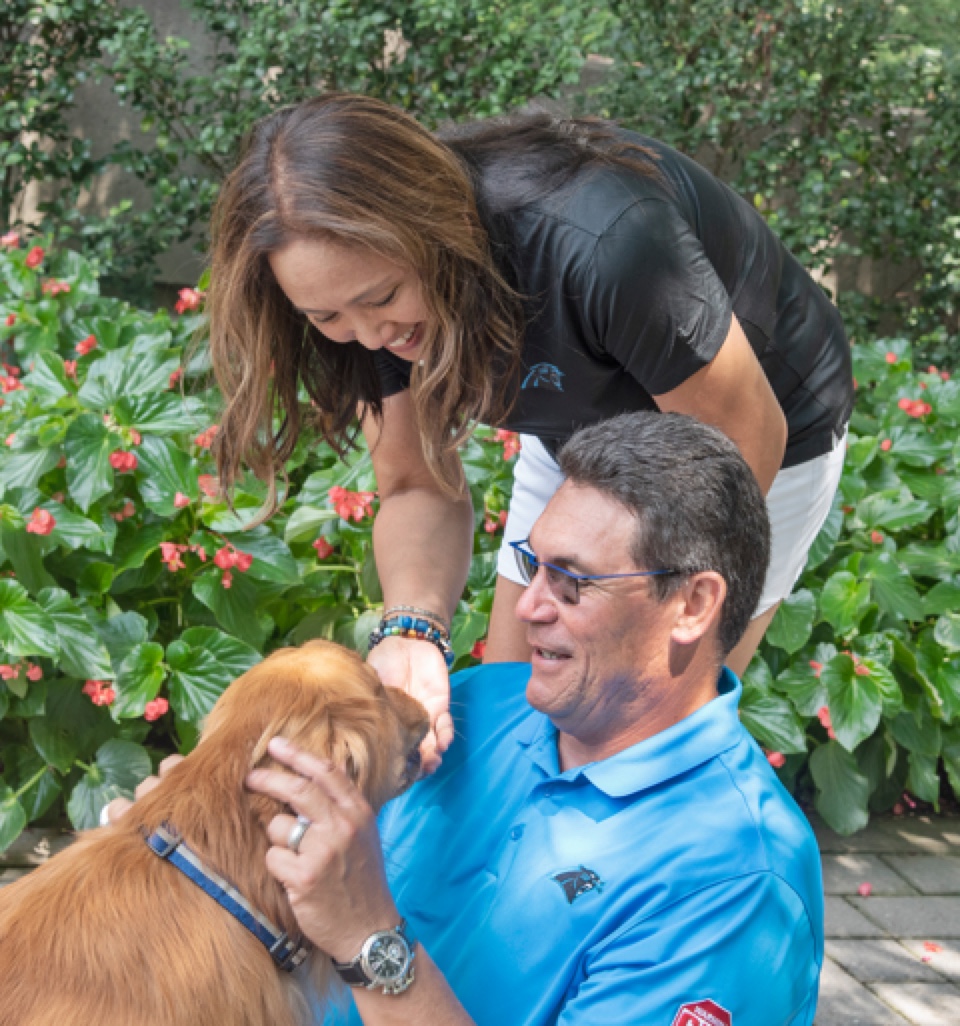 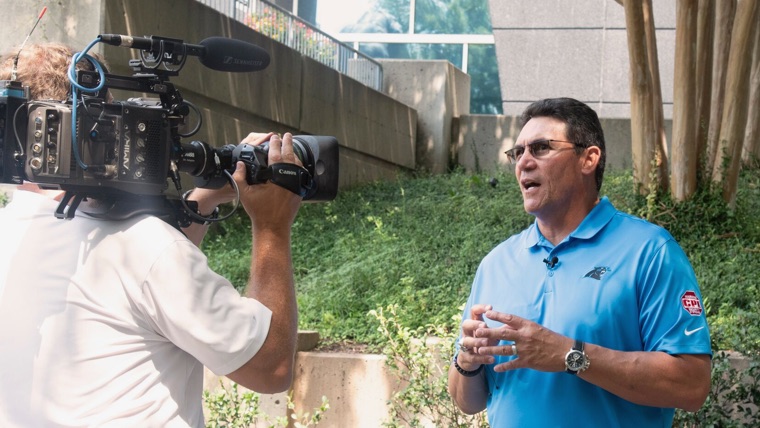 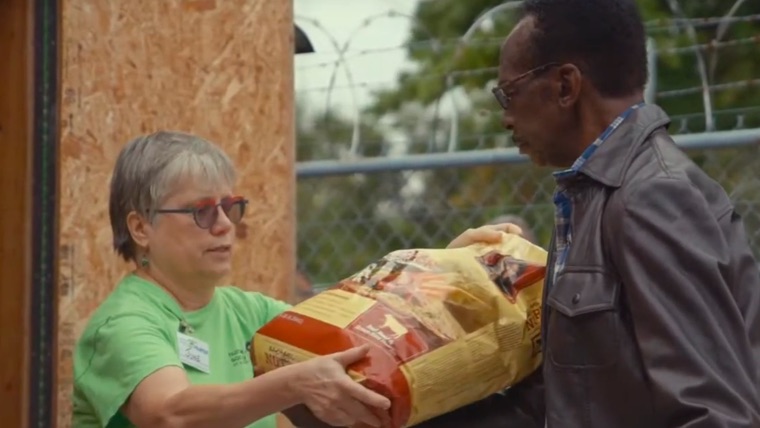 Humane Society of Charlotte: We Are Family

One of HSC’s longest current residents, previously named Grunt, has now been renamed, Clint Eastwood. After spending time with the staff at the Humane Society of Charlotte, they determined that his personality was worthy of such a highly respected name. Much like the Man with No Name, when one tries to describe Clint Eastwood (the […]

The Association for Animal Welfare Advancement has released official data from the Shelter Animals Count National Database regarding the impact of the COVID-19 pandemic on shelter animals. The following linked report provides a look at comparative data on sheltered animals from the first six months of each of the last three years: 2019, 2020, and […]

Paying Tribute to the Heroes of 9/11

This Saturday marks the 20th Anniversary of the 9/11 terror attacks, one of the most catastrophic attacks to occur on American soil. Nearly 3,000 lives were lost in a matter of hours and an additional 6,000 people were injured in the terrorist attack that rocked the foundation of our country. Those that we lost have been missed, loved, and honored every day since.  In the days and weeks that followed, more […]

We’re celebrating 2000 completed adoptions in 2021 as of last Friday, August 13.  Since the beginning of 2021, the HSC team has worked tirelessly to find new families for the animals at our shelter during a year when shelters across the country are maxing out their capacity for care. Each year our organization averages just over […]

What is “aggression” when it comes to dogs?   The term aggression gets thrown around often to describe animals that struggle to control their behavior, but in reality, the word aggression could easily be replaced with the words fearful, guarding, nervous, or reactive.   Regardless of the description, dog aggression is one of the most common behavior problems reported to the Behavior […]

A campaign for pets and people

The Humane Society of Charlotte

We're focused on the future.
How can you help?

For questions or more information...

Thank you for your interest in the We Are Family Capital Campaign for the Humane Society of Charlotte. Please fill out the information below and a member of our leadership will get back to you with more information! 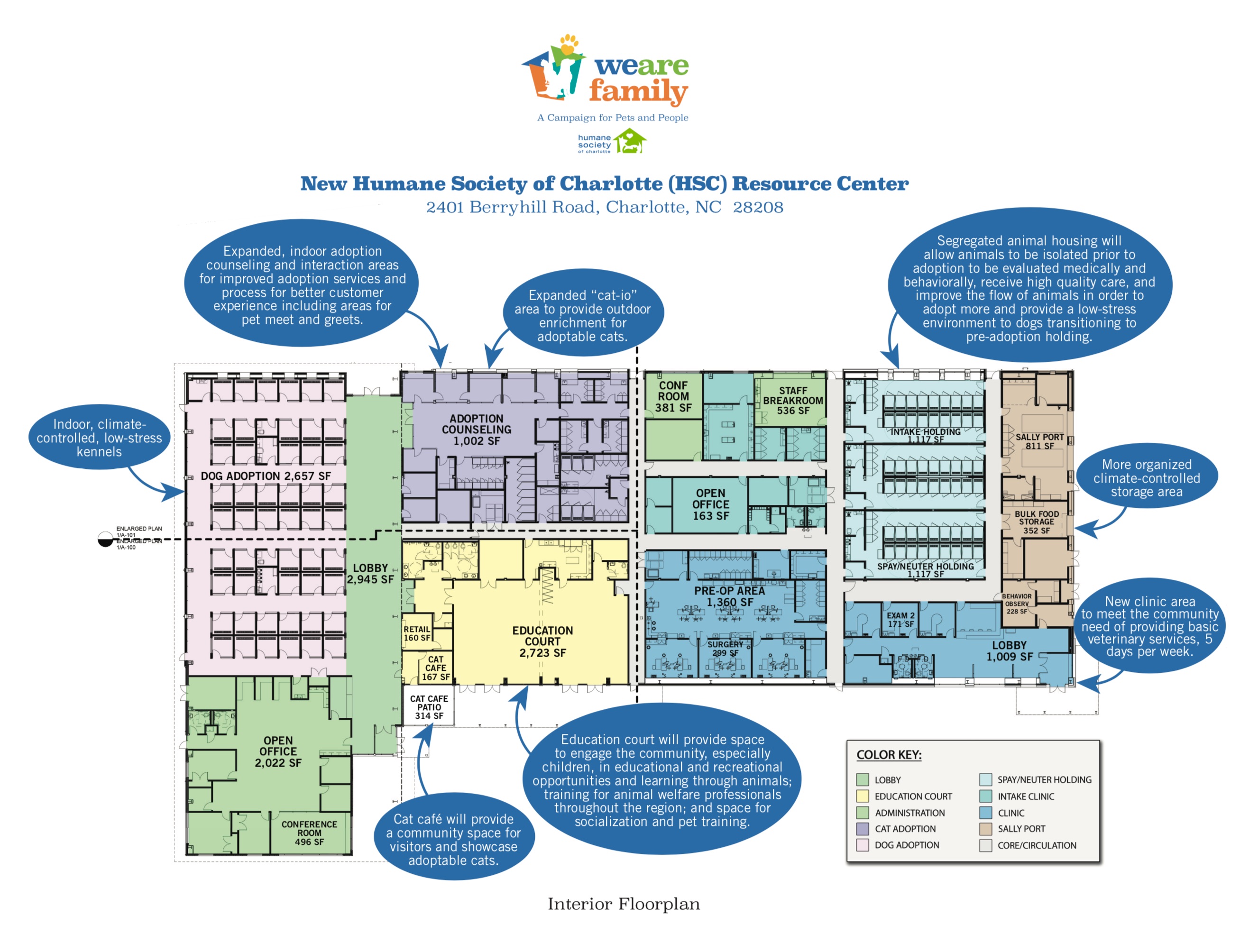